I had a night in to myself, so decided to bake a few treats.  I had seen an idea on the internet to make chocolate chip cookies, but put an Oreo in the middle.  Sounded good to me!  I had some frozed dough in the freezer, so I let that thaw out and then just patted the dough around the oreo.  They turned out REALLY BIG cause it took a lot of dough to surround that oreo...and then they melted in the oven into ugly shapes....so they didn't really look the best, but sure did taste yummy!  I baked mine at 350 degrees for about 12-13 minutes.  They were best warm....so grab a glass of milk and dunk these monster cookies in and enjoy! 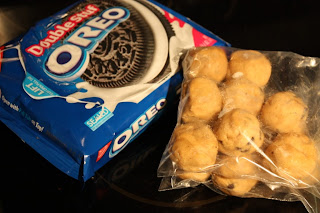 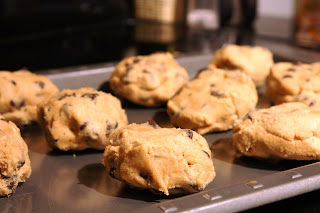 Right out of the oven: 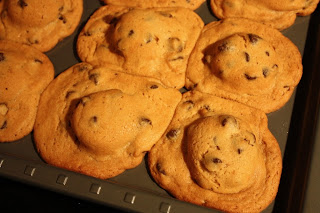 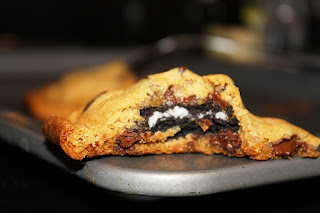 Our guest bathroom is very small, but we like the modern look of it and it fits in very well with our loft.  Everything in here came standard when we built the place.  I used some leftover candles from our wedding to decorate the shelf below the mirror....and then have just used rolled up handtowels and decor on the shelves.  It really is multi-purpose cause we don't have room to store much, so is always handy to be able to store something and let it serve as your decor! 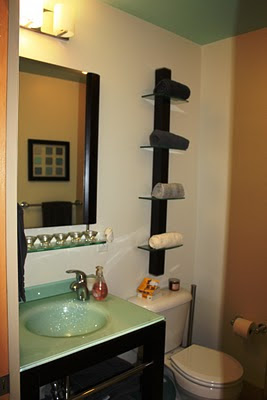 We had picked this shower curtain out cause the husband loves blue and the different shades of blue seemed to fit with our vanity.  We also painted the ceiling of the bathroom to an aqua color that was similar to the vanity top. 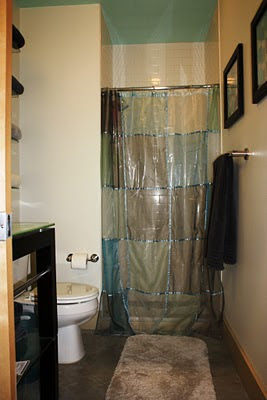 Then I had a blank wall with only a towel bar that needed to be filled with something.  I went to Lowes/Home Depot and just picked up a lot of large paint swatches in the blue/aqua/gray families.  I then cut them down to the same size and placed them in these floating frames.  This is such a cheap thing to do and is so simple, that I hope someone else can use this idead if you haven't seen it somewhere. 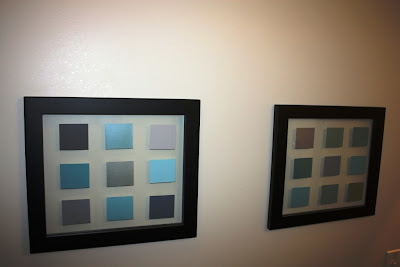 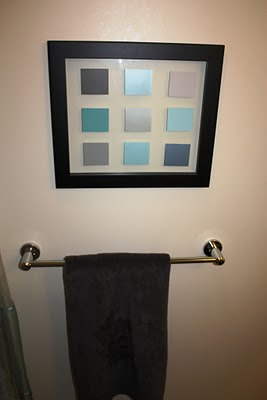 WOWSER- this dish hit the spot tonight!  I had just read on Plain Chicken's blog about a Swiss Chicken recipe....it sounded perfect cause chicken is my most frequently cooked meat (and was on sale for $1.99/lb this week) and we LOVE swiss cheese.  She adapted it from Paula Deen and I made a hybrid between her and Paula's version.  Below is  how I made it and it turned out so good that I don't think I'd change a thing!


Preheat the oven to 350 degrees F. Spred melted butter in 9x13 casserole dish. Add the chicken to the casserole dish and season with salt and pepper. Layer the cheese slices on top - I broke my slices in half and covered each chicken and then I broke up my last slice to fill in the missing areas.  I used some shredded swiss to also help get the chickens thoroughly covered in cheese, which I would recommend doing cause it melted in with the sauce and gave it all a great flavor.

In a medium bowl, combine the soup and wine, season with salt and pepper, and pour over the chickens. Sprinkle the smashed stuffing mix on top and spray with cooking spray. Bake for 45 minutes. Remove from the oven and serve. 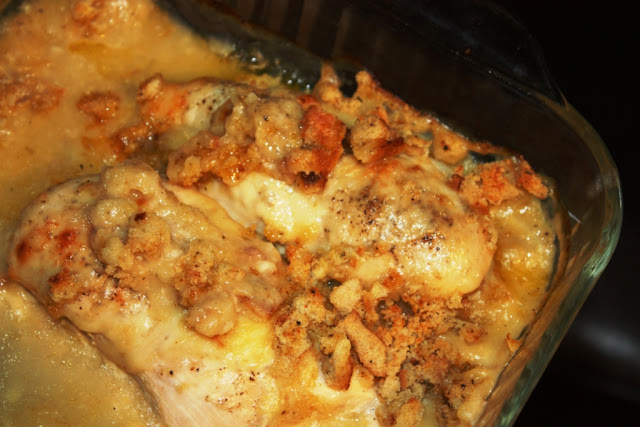 Here are 2 recipes I've done in the last month that were EXTREMELY easy and tasty.  Sorry I didn't get pictures of either one :(

This first one was an appetizer/side and would be great for a party.

Feta Cheese Bake
Using a shallow baking dish or pie dish, pour the pizza sauce into the dish.  Add a few shakes of crushed red pepper (or more if you like a little kick) and spread somewhat evenly around the bottom of the pan.  Crumble the cheese into the pan.  I baked about 30 minutes in 350 degree oven.  I had bought of loaf of french bread, sliced it and put in the oven to toast a bit.  Dip the bread in the cheese/sauce and enjoy!

Note:  For a stronger cheese flavor, this would be excellent with goat cheese.

This next recipe was one I made for dinner and we loved and seriously took less than 3 minutes to assemble- however it does take a while to cook!  It's perfect for us cause I can quickly put it together after work and throw in the oven while we are at the gym.  Then it's ready and waiting when we are home.

Hamburg-Tot Casserole
Using a 8x8 or 9x9 pan, press the raw meat into the bottom of the pan.  Spread the soup over the meat.  Cover with some diced onion.  Pour as many tater tots heaping onto the top as you can!  Bake at 350 degrees for 90 minutes.

I know I've been major MIA lately, but hopefully this will be a lengthy post and make up for it! I never get to travel for work, but I found out a few weeks ago that I'd be visiting our California office in San Ramon (about 45 minutes from San Francisco)...and I was super excited! I had never been to this area before, so it would be a great way to check it out and not have to use my own money :) It was AWESOME and since Dustin has never been to the area, we will definitely be putting this on our trip list for some point soon!

We arrived Sunday afternoon and a very sweet lady that works in the CA office came to our hotel and drove us into San Fran for some quick sightseeing and dinner. We only had about an hour of daylight, so we didn't get much in. We started out with a cable car ride-- it was a great way to experience the CRAZY hills and see some of the city.
! 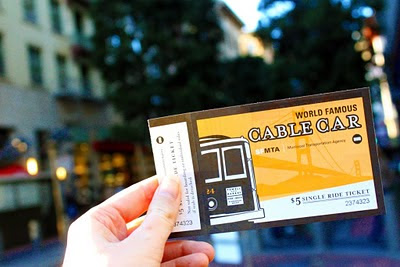 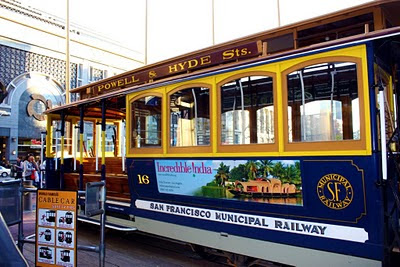 We got off the trolley and went to Ghiradelli square- sampled some wonderful chocolate! 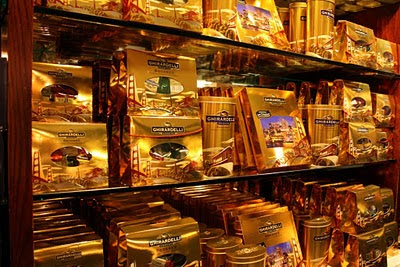 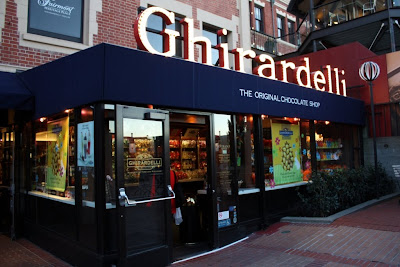 You can see Alcatraz in the distance here. 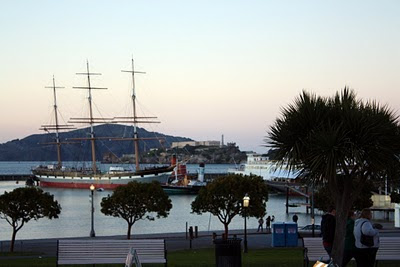 And if you look real closely you can see the golden gate bridge in this photo....I know it looks small, but I promise it's there and I could see it! 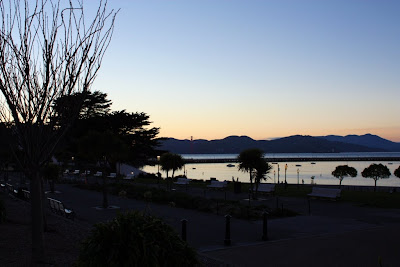 We then walked around Fisherman's Wharf and ate dinner at Scoma's. The menu was HUGE, but there was like 2 things that were not fish or beef (which I don't really eat)-- mozarella sticks or a BLT. I went with the BLT and was some of the best bacon I've ever had! 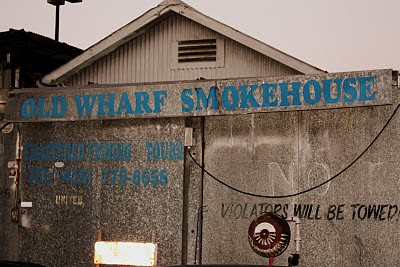 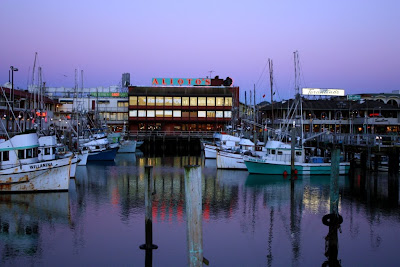 Monday was our first day at work and it was so great to meet all these people that I've worked with for like 7-9 years and NEVER met before! We just had a blast and I am so lucky to have such great co-workers.

On Tues evening, some co-workers took us to a nearby area called Walnut Creek. The downtown area was basically a huge outdoor shopping mall and I seriously felt like I was in heaven...and I'm not even a shopper! They had everything from local stores to chain stores...and it was every single store you could ever think of- Crate & Barrel, BCBG, Tiffany's, Urban Outfitters, Williams Sonoma, etc. For dinner we went to the San Francisco Creamery and I just ordered a fabulous Hot Fudge Sundae for dinner! Man vs. Food filmed an episode here where he attempts to finish the Kitchen Sink which consists of 3 sliced bananas, scoops of up to 8 flavors of ice creams, 8 servings of toppings, mounds and mounds of whipped cream, chopped toasted almonds and cherries. I also ordered a basket of Funnel Cake fries-- best invention ever! Looks like french fries, but was just strips of funnel cake...YUM! 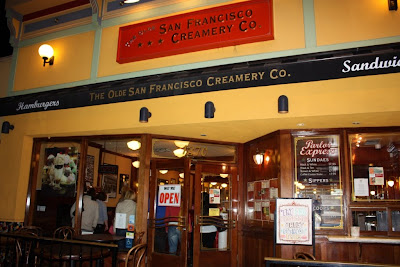 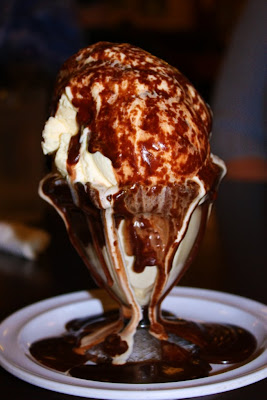 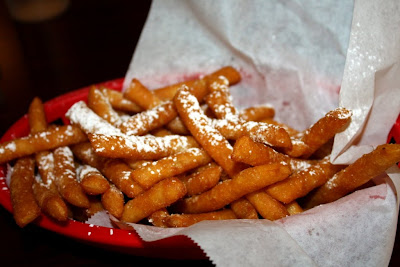 On Wednesday evening a bunch of people went to play Bocce Ball and eat dinner. I couldn't believe how many people had never played bocce ball before- it's such a great game for any age and you can just play in your yard at home. 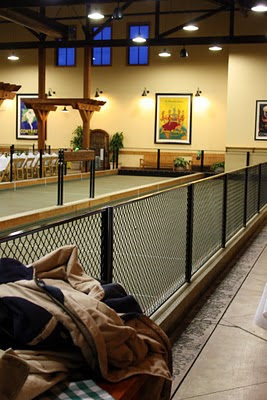 On Thursday for lunch they took us to Bridges, which is where Mrs. Doubtfire had a scene filmed-- the food was really great here also. 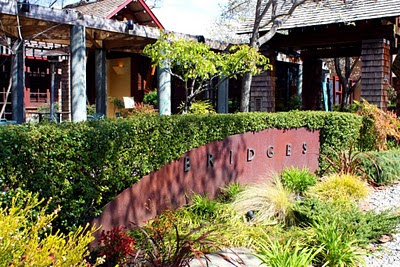 And how could I have almost forgot this-- the HIGHLIGHT of my trip was going to In-n-Out Burger!!!!!!!!!!!! I've been waiting years to try this and had really high expectations and the burger exceded those expectations! It was hands down better than my beloved Big Mac! The menu is very basic- hamburger, cheeseburger, fries, shakes, soda. However, they have a "secret menu" that my co-workers were so kind to make sure I reviewed ahead of time! I got the Animal Burger- which basically means they grill the burger in mustard, and add grilled onions, pickles, lettuce, tomato, and spread (which is similar to thousand island dressing). I went a little overboard and also got the Animal fries- which is basically all the same toppings but with melted cheese. If I did it again I would just have the fries plain cause it was a little too much of the same flavors. Oh yum, I gotta quit thinking about this! 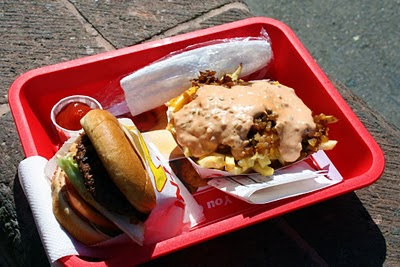 In a nutshell, that about sums it up!